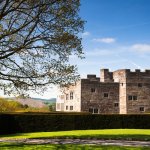 Castle Drogo is the last castle to be built in England. The monument was constructed near Drewsteignton, in Devon, between 1911 and 1930 and has been owned by the National Trust since 1974. Today, it is a popular visitor attraction.

The Grade I listed building and Grade II listed gardens have recently been subject to a major refurbishment, to ensure they can continue being a landmark visitor destination for many years to come. The main part of the project has been making the castle watertight by refurbishing the roof and windows, and re-pointing the building.

Described by the National Trust as “conservation on a grand scale”, the project involved sealing Castle Drogo’s medieval-style flat roof that was originally sealed using asphalt but had cracked over the years and started to leak.

This was no mean feat, considering the size of the flat roof – the equivalent of two international football pitches! Designed to withstand changes of temperature and rainfall, the new roof has two layers of membranes. Without the work, the National Trust says the national treasure would have been lost, due to erosion from the elements.

English businessman Julius Drewe, founder of the retail empire, Home and Colonial Stores, decided to build the castle on land overlooking the Teign Gorge. He believed the site was the one-time home of his medieval ancestor, Drogo de Teigne. Drewe chose the famous architect, Edwin Lutyens, of Kensington, to design the castle. Lutyens was one of the most renowned architects of the era, famed for creating country houses, public buildings and war memorials.

The son of a vicar, Drewe was 54 when he bought 450 acres of land on the outskirts of the village of Drewsteignton in 1910. His family was affluent, as both his father Rev George Smith Drew and mother Mary (nee Peek) came from well-off families of grocers. He added the “e” to the family name himself.

After leaving private school at 18, the teenager followed in his family’s footsteps, launching his own tea shop, after working as a tea buyer in China. He expanded his business in 1883, moving to London and developing Home and Colonial Stores, which became one of the UK’s largest retail chains. By 1903, he had 500 stores across the country.

By this time, Drewe had already been able to retire from actively participating in the firm, having made his fortune. He often enjoyed holidays with his first cousin, Richard Peek, the rector of Drewsteignton. It was during one of his frequent stays that he formed the idea of building his own castle in the home town of his ancestor. In 1910, he told Lutyens, “Build me a castle!”

Lutyens duly obliged and the foundation stone was laid on 4th April 1911 – Drewe’s 55th birthday. It took many years to build the castle. The First World War between 1914 and 1918 delayed the construction work and the subsequent economic downturn also caused delays.

In fact, the magnificent Castle Drogo wasn’t completed until 1930, so it took Drewe 19 years to realise his dream. It was the last castle to be built in England and the last private house to be built wholly of granite.

During the construction process, Drewe had to scale down his original plans and the castle ended up one-third of the initial size that Lutyens had planned. The exact cost of the building is unknown, although it is believed that the costs were much higher than anticipated, partly due to Drewe’s idea of doubling the thickness of all of the walls, to make the building more authentic, in the style of historic castles.

Around the time of the Great War, the plans were amended, with the western wing and the great hall abandoned. Even with Drewe’s fortune, costs had started escalating. The castle was relatively modern inside, with electricity and lifts. Power was supplied by giant turbines on the river below.

The beautiful gardens surrounding the castle were also designed by Lutyens, assisted by his fellow designer, George Dillistone. Although Lutyens’ work is still well-known today, Dillistone is not as well-remembered. This is a shame, as he created some wonderful designs. Active from the late 19th century until his death in 1957, he was famous in his day and was largely responsible for the formal design of Castle Drogo’s gardens. In particular, the planting scheme was down to Dillistone. It contrasts sharply with its setting on the wilder edge of Dartmoor.

Lutyens also brought in his friend, garden designer Gertrude Jekyll, in 1915 to assist with the planning. Lutyen himself had some beautiful designs in mind. One of his other major projects was designing the town plan for New Delhi in India, but he valued the input of his fellow designers when it came to Castle Drogo.

Jekyll designed the planting scheme on the drive approaching the castle. The gardens are noted for their mixture of blooms including magnolias, rhododendrons, herbaceous borders, shrub garden, rose garden and the circular grass tennis court, which is now used for croquet.

Sadly, Drewe died in 1931, aged 75, after enjoying the pleasure of living in his castle for just one year. His family continued to live there, until his descendants gave Castle Drogo and 600 acres of land to the National Trust in 1974. It was the first time the charity had acquired a 20th century property, but they realised how special the castle was.

The castle’s extensive restoration began in the 21st century, with a new visitor centre, shop and café opening in 2009. The previous café had used industrial kitchen equipment, which English Heritage felt was not appropriate for a Grade I listed building. The National Trust had launched a public appeal for donations towards the extensive refurbishment in February 2011.

Now a popular tourist destination, thanks to the National Trust, the castle, gardens and attractions, such as the café and visitor centre, are open all year round for visitors.

Devon is also home to the Devon SEO Co, a leading SEO specialist with extensive experience. Our expertise enables us to drive an increased amount of search engine traffic to your website. Contact us on 0800 404 5988 to find out more about our professional SEO services.