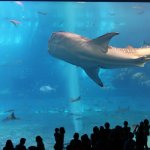 Located in Ocean City, Sutton Harbour, Plymouth, the largest aquarium in the UK is the National Marine Aquarium. It opened in May 1998 with the aim of supporting conservation, education and research. It is the only UK aquarium to be run as a charity.

Plymouth has been home to an aquarium since 1888. It used to be housed at the British Marine Biological Association. The new, larger aquarium that was built in 1997 in the Barbican district became the National Marine Aquarium.

Run by the charity, Ocean Conservation Trust, whose goal is to connect the public to the ocean and marine life, the world-class, professional team at the aquarium care for more than 4,000 marine creatures and are solely dedicated to education and conservation in the marine environment.

With the world’s oceans being more in need of help than ever before, as a result of pollution, the charity aims to take its mission worldwide.

Divided into several zones, the aquarium has become home to a multitude of different species: the four main zones are Plymouth Sound, Atlantic Ocean, British Coasts and Blue Planet. Visitors to the aquarium can see creatures from everywhere in the world, from local Plymouth waters to Australia’s Great Barrier Reef.

The Plymouth Sound zone focuses on the wide range of habitats found along the local coastline. A total of 17 tanks, including a wave tank and a rock pool, house some 80 species of fish and invertebrates, such as rays and sharks.

The Eddystone Reef exhibit features a host of creatures found on the reef, which is located 19km south of Plymouth. A huge window gives visitors a bird’s eye view of conger eels, pollack, bream, mullet, smoothhound sharks, flatfish and rays on the seabed. Crabs and lobsters can be spotted hiding in the rocks.

The Atlantic Ocean zone comprises many different areas including the Ocean Lab, Ocean Drifters, Lost at Sea, the Observation Deck and Ocean Predators – Ocean Drifters opened in 2009 for species such as moon jellies, the upside-down jellyfish and Japanese sea nettles.

The aquarium also houses the deepest tank in the UK, housing 1,000 fish such as lemon shark, nurse shark, sand tiger shark, barracuda, tarpon and southern stingray. With water pumped in from Plymouth Sound, the tank’s volume is a staggering 2.5 million litres.

At 10.5 metres deep, the tank is the centrepiece of a £4 million expansion of the aquarium, which took place in 2002. Visitors can walk under the water through an acrylic tunnel to watch the amazing fish living in the tank, which is supported by a 160-tonne steel reinforcement. Tiger sharks are the most popular visitor attraction there.

Modernised in 2009, when the aquarium brought in the UK’s largest ever shipment of live fish from Barbados, in the West Indies, the giant mega-tank was updated again in 2015 and 2016, when the sand tiger and lemon sharks arrived.

Visitors wishing to see what life’s like behind the scenes for aquarium workers can look round the Laboratory and watch biologists taking care of the young marine creatures who have been bred at the aquarium. This is the most important moment for the marine animals, as they are nurtured through infanthood. As they mature, they are put into the ecosystem that suits their natural life in the wild.

As well as enjoying all the exhibits, the aquarium is also a great place to learn. There are plenty of events for visitors of all ages, including Ocean Todds for toddlers and young children, outdoor toddler activity sessions and Sleeping with Sharks sleepovers for people of all ages.

The latter activity is taking place on various dates throughout 2019. The aquarium sleepover is an exciting experience for parties, group bookings and families. Attendees can find out what they can do to help protect the marine environment.

Visitors can book a kids’ birthday party at the aquarium. There are also boat trips with knowledgeable marine biologists and conservationists to explore Plymouth’s fascinating natural harbour, while VIP behind-the-scenes tours of the aquarium take place daily. There really is something for everyone at the National Marine Aquarium, which is open all year round.

A destination as fascinating as Devon deserves a top-quality SEO specialist. Boost your business’s chances of success by contacting the Devon SEO Co.

Find out more about our SEO expertise and how we can help to drive an increased amount of search engine traffic to your website, by giving us a call on 0800 404 5988.