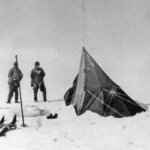 Memorials were erected across the UK and his name became associated with the Antarctic forevermore. However, Scott’s legacy changed over time and in the late 20th century, historians began to question his expedition leading competence.

In the 21st century, public perception has changed again. Modern experts have recognised Scott as a great explorer, following the amazing find of his written orders from 1911, which cast new light on the reasons behind the failure of his final expedition.

Scott was born in Plymouth, Devon, in June 1868. The third of six children, he attended a local day school, before going on to Stubbington House School in Hampshire, where students were tutored for the entrance exams of the Royal Navy.

His naval career began in 1881 after he passed his examinations. As a cadet at the age of just 13, he joined the training ship HMS Britannia, based at Dartmouth. In July 1883, aged 15, Scott became a midshipman, passing out of Britannia seventh overall in his class of 26 cadets.

In October 1883, he was off to South Africa to join HMS Boadicea, of the Cape squadron. This was the first of numerous ships on which he was a midshipman. In 1888, he passed his sub-lieutenant examinations and in 1891, he graduated with first-class certificates from a two-year torpedo training course on HMS Vernon.

Despite his exemplary naval career, Scott’s life began to change in 1894, when his father sold the brewery. Investing the money from the sale unwisely, he ended up bankrupt. He died at 66 of heart disease. Scott became financially responsible for the whole family’s wellbeing, but he didn’t earn enough as a naval officer to support his family.

In June 1899, while home on leave, he met the President of the Royal Geographical Society, Clements Markham, in London. Scott learned of a planned exploratory trip of the Antarctic, on the steamship Discovery, funded by the RGS. The chance of an early command post spurred him into volunteering to lead the Polar expedition.

The Discovery expedition began in 1901 and it took all Scott’s naval skills to lead the 50-strong team, most of whom had no experience of Antarctic waters. The expedition lasted until 1904 and was largely a journey into the unknown.

King Edward VII had visited the ship before they set sail. Towards the end of the expedition, as the crew began the return voyage, Discovery became trapped in the ice. Eventually, explosives were used to free her.

When Discovery returned to Britain in September 1904, despite the loss of crew member George Vince, who had slipped over a precipice in March 1902, the mission was hailed a huge success, capturing the public imagination.

Scott’s Terra Nova expedition is the more famous of the two but ended with his death. In an era known as the Heroic Age of Antarctic Exploration, he wasn’t the only person trying to reach the South Pole. Fellow explorer Ernest Shackleton, of County Kildare, Ireland, launched the Nimrod expedition to Antarctica in 1907, but they had to turn back around 112 miles from the Pole. This was the closest anyone had come.

When Nimrod returned to the UK unsuccessful in 1909, Scott was spurred into returning to Antarctica with the aim of reaching the Pole first. The Terra Nova expedition set off in 1910, with Scott commanding the ship. He stated his mission was to “reach the South Pole” to secure the “honour of this achievement” for the British Empire.

Arriving in Melbourne, Australia, in October 1910, he suffered some early misfortune. Terra Nova battled through a severe storm, which nearly sank her. Then, she became trapped in ice. Some of the ponies died making the trek from the supply point to the base camp due to the intense cold.

Scott learned that rival explorer Roald Amundsen of Norway was already attempting to be the first man to reach the South Pole. The race was on – and Amundsen had an advantage, as he was using sled-dog teams that were used to the cold, rather than ponies. His base was also 69 miles closer to the Pole than Scott’s.

Sadly, early misgivings about using ponies proved correct, as almost all of them died on the journey. Some of the team wondered why Scott hadn’t used more dogs. This was to prove crucial in the final outcome of his expedition.

By 2nd August 1911, Scott wrote in his journal that he was feeling more hopeful. They began the trek south on 1st November, using a mixture of early motor vehicles, ponies and dogs to pull the loaded sledges.

A final small group of four or five men was to make a dash for the Pole to beat Amundsen after the team completed the main part of the arduous trek. As the journey progressed, the support team gradually became smaller – members turned back, as planned, at various stages of the route.

Who won the Polar race?

This was long before the days of digital technology, so Scott and his team travelled with no knowledge of how the rival expedition was getting on. On 4th January 1912, Scott decided to lead a small party on the final leg of the journey.

The group included physician Edward Wilson, Royal Navy sub-lieutenant Henry Robertson Bowers, Captain Lawrence Oates of the British Army and Petty Officer Edgar Evans, a Welsh seaman. They finally reached the South Pole on 17th January 1912, but they discovered Amundsen had beaten them to it by five weeks.

After all their trials and tribulations of the past two years, Scott was devastated and noted in his diary, “All the day dreams must go … Great God, this is an awful place!”

The party began the gruelling 862-mile journey back on 19th January 1912. Scott wrote it was going to be “dreadful and monotonous” because their hopes had been dashed. Initially, they made good progress and covered 300 miles, despite horrendous weather.

However, Evans fell during the descent of the Beardmore Glacier on 4th February and became ill. Having no choice other than to carry on, he fell again on 17th February and died near the foot of the glacier. The rest of the team struggled on, exhausted.

They reached a pre-arranged meeting point at 82°S ahead of schedule and expected to find dog teams there to accompany them back. On 27th February 1912, Scott wrote in his diary they had discussed “meeting dogs”, but he now doubted whether they would reach the safety of the next depot – suggesting the dog teams hadn’t arrived.

Oates suffered terrible frostbite from 2nd March and fell very ill, rendering him almost incapable of carrying on. The temperature dropped to around −40°C. On 16th March, he walked out of the tent and was never seen again. He had voluntarily sacrificed his own life to save his friends.

The same day, Scott wrote a letter suggesting that the dog teams had simply “abandoned” them. He seemed resigned to his fate and wrote, “We very nearly came through. No-one is to blame.”

They camped on 19th March 1912, but a blizzard prevented them from making any further progress. The men wrote farewell letters and Scott’s final diary entry was made on 29th March, with the words, “For God’s sake, look after our people.”

When Scott and the team didn’t return, a search party was sent to look for them. On 12th November 1912, Charles Wright and a party of British explorers were crossing the Ross Ice Shelf when he spotted the top of Scott’s tent protruding through the ice. He described it as a “great shock”.

Scott, Bowers and Wilson were believed to have died on 29th March, or the day after. Scott’s diaries revealed every detail of their journey and its tragic end. Members of the search party said the horrific sight that greeted them would never leave their memory.

A funeral service was held at the scene and when news of the explorers’ deaths reached Britain, there was a national outpouring of grief and they were heralded as heroes.

On a positive note, Scott had collected about 40lbs of rock, which contained fossilised seed ferns. These specimens provided proof that Antarctica had once been hot enough to support plant life, making them a major scientific find.

The initial mood towards Scott and his status as a hero subsided in the late 20th century. Historians in the 1970s questioned why the expedition had left five explorers dead. It was suggested his apparent stubbornness in using horses over sled-dogs had partly contributed to his downfall, especially since Amundsen had successfully used dogs.

It was questioned whether Scott had properly planned the journey and it was claimed his scientific goals had been unattainable and had cost his men dearly. However, in 2012, new information surfaced when author Karen May published a report that suggested Scott’s orders hadn’t been followed.

According to new research, the whole party could have been saved if his written orders had been followed by officers in his command. He had issued crucial written orders for dog teams to meet the return party and help them to get back safely.

New information surfaced which proved the orders had been disregarded and the dog teams had never arrived, backing what Scott had reported in his diary entry of 27th February 1912. This knowledge has restored Scott’s reputation as one of the greatest explorers in history. As one of Devon’s most famous sons, his memory is now no longer tarnished.

Contact The Devon SEO Co on 0800 404 5988 to find out how our specialist SEO services can help your business to conquer the competition.