The Top 5 Beaches in Devon 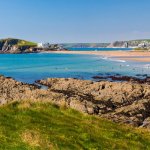 The county of Devon, in south west England, is a mix of sandy beaches, towering cliffs, quaint towns and beautiful national parks. Its coastline is so breathtaking that it’s known as the English Riviera, thanks to resorts such as Torquay, Brixham and Paignton.

Devon excels in terms of its beautiful beaches, which are ideal for sunbathing, swimming and surfing. Read on to find out more about some of the unique beaches that our beautiful county has to offer…

Located in north Devon, Woolacombe is highly ranked on Trip Advisor as one of the best beaches in the world. The three-mile stretch of golden sand has plenty of space, even during peak season.

Between Easter and September, the beach is patrolled by RNLI lifeguards. This enables visitors to surf, kayak or paddleboard in safety.

Pubs, cafés and shops offer tranquil views of the coastline and there’s reasonably priced parking. Dogs are welcome from April to November, with a few restrictions.

One of Devon’s most fascinating tourist spots is Ilfracombe’s Tunnel Beaches that are accessed via tunnels built through the rocks back in the 1820s! There are a number of shingle beaches, providing a tranquil spot for sunbathing. Visitors can also enjoy a swim in the Victorian tidal pool built into the rocks.

It’s a particularly good area for children to discover rock pools at low tide, while information boards provide a guide to Victorian bathing etiquette, as well as a history of the beaches.

There are no lifeguards here and the beaches aren’t great for sun-worshippers, as the cliffs provide shade for part of the day.

If you’re looking for a beach which has appeared on the big screen, look no further than Saunton Sands. The location is so scenic that it featured in films such as Edge of Tomorrow and The Guernsey Literary and Potato Peel Society. It also appeared in the video for Robbie Williams’ massive hit single, Angels.

It’s a great place to whizz down the sand dunes on a sledge, snowboard or tray, as it’s just in front of England’s largest sand dunes, Braunton Burrows. More than 400 dune plant species are growing there!

A life guarding scheme operates there (the Graduate Lifeguard Programme), which is aimed at promoting safety awareness along the coast.

The National Trust car park next to the beach is within an Area of Outstanding Natural Beauty.

Great for families and for sunbathing, the waters are clean and inviting.

Boasting a large stretch of sand, Bantham is one of Devon’s most popular surfing beaches. With smaller waves for beginners, plus rips and breaks that will satisfy those with more experience, it is also ideal for the more sedate stand-up paddle surfing.

Bantham is a great summer destination for people of all ages.

If you’re feeling all washed up, give us a call on 0800 404 5988 to find out how our professional SEO services can help get you back on the road to success.