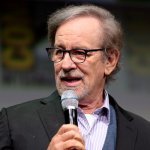 American director and producer Steven Spielberg has spoken of the “abundance of natural beauty” in Dartmoor, after spending time filming in Devon. The pioneering film-maker has made movies all over the world, but he admitted to feeling “stunned” by the beautiful Dartmoor landscape.

He spent several weeks in Devon when he was filming the award-winning epic, War Horse, about the role that horses played on the Western Front during the Great War. He said the county was the most beautiful place he had ever seen.

The 72-year-old is responsible for some of the most iconic films of all time, including Jaws, Indiana Jones, ET and Schindler’s List, to name but a few.

After filming on moorland at Sheepstor, near Yelverton, he said in an interview, “I have never before, in my long and eclectic career, been gifted with such an abundance of natural beauty as I experienced filming War Horse on Dartmoor.”

War Horse was based on the book of the same name by British author Michael Morpurgo. He was inspired to write it, in 1982, after chatting to World War I veterans in his home village of Iddesleigh in Devon.

He spoke to a retired horseman of the Devon Yeomanry, a former member of the cavalry and a villager who recalled the Army arriving to buy local horses to go to the Western Front. His book paid tribute to the eight million horses who died on all sides during the 1914 to 1918 conflict.

The book was a massive hit and was runner-up for the Whitbread Book Award. It was made into a stage show, also called War Horse, which opened at the Olivier Theatre in London on 17th October 2007. The play has toured all over the world.

Spielberg directed the movie, War Horse, which stars Jeremy Irvine in the lead role of Albert, who joins the Armed Forces to go to France and save his beloved horse, Joey.

Albert’s father, the alcoholic Ted, sells Joey (their plough horse) to the Army without Albert’s knowledge, leaving him heartbroken. The film depicts the war through the eyes of the horses who face danger and death every day. It tells Joey’s story as he survives many horrors during the war.

Eventually, the horse is reunited with Albert and the two of them make it back to England, where they live out their lives in peace and tranquillity.

Spielberg was in Dartmoor for several weeks filming War Horse, after choosing the location himself. He described how he felt “gifted” for having spent time there.

He loved the stunning scenery and admitted he had “hardly scratched the surface” of what the region had to offer, describing its “visual opportunities.”

Released on 25th December 2011, the film won a multitude of awards, including the American Film Institute Awards’ film of the year 2011. It also received six Academy Award nominations.

The film’s production company, Afterworks Ltd, described the shoot on Dartmoor as “incredibly successful”, adding that every member of the crew had enjoyed a “great experience.” They also thanked the local residents for their support during the filming.

The film-maker reportedly felt at home in Dartmoor during filming. He had arrived at Exeter airport in a private jet and went straight to Holwell Farm, near Widecombe-in-the-Moor, which was being used as the production crew’s base. Around 400 cars and 20 lorries descended on the site.

Filming began on day one at 4am, with the director and crew shooting scenes near Bonehill Rocks. Spielberg was said to be very friendly and he loved the farm animals. Described as an easy person to be around, with no airs and graces, he was even spotted in a local grocery shop, buying a bottle of milk.

Dartmoor had been selected by Spielberg early on as a front-runner for filming, with its rolling landscapes being perfect for the early scenes. Its role was expanded as a direct result of Spielberg’s personal love of the area.

Initially, filming was due to have been completed in a few days, but on arriving and taking in his surroundings, Spielberg decided he wanted to do more there, because he loved the place so much.

Local people were cast as extras, although a great deal of secrecy surrounded the film at first and they didn’t know what it was going to be called. Around 1,000 people turned up to the casting for extras and were chosen purely on how they looked and whether they would fit into scenes set in the “olden days”.

The training of the horses was amazing, according to blogger Bracken Vernon-Jelier, a PR executive from Yelverton. She wrote that she had seen the trainer at work for scenes shot on Ringmoor Down. The horses were trained to fall down on cue when a gun was fired.

It was reported that any properties with white window frames had to be repainted, because they caused glare when filming. The film crew negotiated with home-owners and pledged to restore the frames to their original condition, if required, once filming had ended.

They also had to create two different seasons, spring and autumn. Painstakingly, they attached extra flowers into the wild foliage for the spring scene and then removed them all again for autumn!

The film crew successfully converted the area back to 1914, completed the shoot and then restored it back to the 21st century afterwards. All the modern lamp fittings, signs and noticeboards had to be taken down and any post boxes were covered up and disguised.

Spielberg’s endorsement of Devon was seen as the best advert the area could have, as War Horse was watched by millions of people.

This Devon SEO Co specialises in driving increased search engine traffic to our clients’ websites. Contact us on 0800 404 5988 to find out how our professional SEO services can help your business… after all, as Mr Spielberg will testify, there’s a lot about Devon that is well worth shouting about!