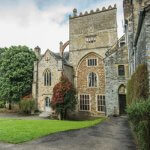 If you enjoy holidays steeped in heritage and tradition, Devon is the place to be, as the county is home to some of the most well-known historic houses in the UK.

From a castle nestling deep in the countryside, to the former home of famous sea captain Sir Frances Drake, Devon has a variety of stately homes that will make any heritage-lover’s holiday complete. Read on to find out more about some of the wonderful historic houses of Devon…

Buckland Abbey, estate and garden was once the home of the famous English sea captain, Sir Frances Drake. The building was originally a Cistercian abbey, built in 1278 for Amicia de Claire, the Countess of Devon.

In 1541, politician Sir Richard Grenville bought Buckland Abbey and converted it into a stately home. Drake bought the property in 1581 and lived there for 15 years. Today, it’s packed with amazing artefacts, collected from his travels across the globe. There are interactive galleries, detailing his life story. The house, craft workshops, Cider House gardens and Medieval Great Barn are operated by the National Trust.

Devon’s very own majestic castle, located in Drewsteignton, Exeter, was constructed between 1911 and 1930. It was designed by architect Edwin Lutyens for millionaire Julius Drewe, who founded the Home and Colonial Stores, the UK retail chain.

The castle has a Grade II listed formal garden, also designed by Lutyens, which contrasts with its wild setting on the edge of Dartmoor. Open to visitors, the public is invited to stroll through the rhododendrons, magnolias, herbaceous borders, rose and shrub gardens and circular grass croquet court.

The A La Ronde, on Summer Lane, Exmouth, is a unique 16-sided building, dating from the late 18th century. The Grade I listed building is owned by the National Trust. It was built for two unmarried cousins, Mary and Jane Parminter, in 1796, who decided to live together in later life. Jane was said to have come up with the design, based on the Italian church, the Basilica of San Vitale.

With 20 rooms, it is full of mementos of the owners’ trips all over the world, as they were well-travelled and led eccentric lives. The interior has maintained its traditional charm, while the lush gardens allow visitors to play historic outdoor games, such as croquet and snakes and ladders.

Saltram House, on the Devon Expressway, in Plymouth, is a stunning example of a Georgian mansion. The Grade II listed National Trust property is first mentioned in historic documents dating from the early 17th century, when it was owned by James Bagg, an MP and later the Mayor of Plymouth.

Designed by Scottish architect Robert Adam, it features exquisite ceilings, beautiful 18th century wallpaper, period furniture and a large collection of paintings. The stately home, its extensive gardens, orangery and park, which have been further developed over the years, are open to the public.

Arlington Court and the National Trust Carriage Museum, in the parish of Arlington, is a winning combination of a fascinating Regency house, expansive parkland and magnificent horse-drawn vehicles. The house was built between 1820 and 1823. One of the main features is a display of model ships, collected by the one-time owner, Rosalie Chichester.

The collection of carriages is not only for display. Visitors can enjoy a relaxing horse-drawn carriage ride around the grounds in summer, surrounded by plenty of woodland and garden walks.

Located in Bolham, Tiverton, Knightshayes Court is a gothic Victorian building, which dates from 1869. Designed by William Burges, one of the greatest Victorian architects, for the Heathcoat-Amory family, it is a rare surviving example of his work. The beautiful carved entrance porch was crafted by the famous sculptor, Thomas Nicholls.

The National Trust-owned house is Grade I listed, and the gardens are Grade II listed.

Designed by Edward Kemp, the gardens include a rare stické court (a sport similar to tennis) dating from 1907. There is also extensive topiary, rare shrubs, mature trees, stables and a traditional walled kitchen garden to explore. After opening to the public in 1974, the estate has become a popular visitor attraction.

A destination as popular as Devon deserves a top-quality SEO specialist. Let us help improve your chances of success.

Contact us on 0800 404 5988 to find out how our professional SEO services can improve your business performance.