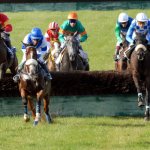 A day at the races is often associated with the New Year – so get 2019 off to a galloping start with a visit to the Exeter races. As one of Britain’s most historic racecourses, Exeter has been in existence since the 17th century and provides an exciting day out for people of all ages.

The racecourse was created during the reign of Charles II, who was the king of England from 1660 until his death in 1685. A keen horse racing fan, he commissioned the building of the highest racecourse in England, at a height of 850ft at the top of top of Haldon Hills.

There are no formal records of the horse races held there in the early years, but by 1750, when the Jockey Club was formed, it was known races were being held at Exeter under the new, standardised racing rules. The first official records of meetings at the course began in 1804.

In the 19th century, Exeter became the scene of a less pleasant event, when two men decided to settle their differences through a duel at the racecourse in 1833!

It was reported that doctor Peter Hennis, a revered local physician, was challenged to a duel with pistols by judge Sir John Jeffcott over allegations that Hennis had been spreading gossip.

The duel took place on 10th May 1833, when 31-year-old Hennis lined up opposite 37-year-old Jeffcott. As the two gentlemen fired at each other, Hennis was wounded. This was reportedly the last duel ever to take place in Devon. Sadly, Hennis died from his wounds a week later, on 18th May.

Jeffcott was said to have fled to Sierra Leone to escape criminal charges, while Hennis’s funeral was a massive affair, as he was an eminent physician who had been the hero of the virulent cholera outbreak in 1832. Around 250 dignitaries attended the service at Exeter Cathedral and an estimated 20,000 local people lined the streets to pay tribute, as the funeral procession went by.

Aside from the rather dubious honour of having been the site of the last duel in Devon, Exeter racecourse has been the scene of many happier events, having launched the careers of several National Hunt champions, including Desert Orchid and Best Mate.

It was designed by the renowned architect, J Archibald Lucas, who was famous for designing a number of prominent buildings in Devon, including the country house, Rosamondford, in Aylesbeare, in 1906.

Turning his expertise to the racecourse, he designed a stand that was 75 feet long and 32 feet deep, with a capacity to hold more than 600 people. Manufactured from steel and with a sturdy iron roof, the majority of the spectators would be under cover. It also had the jockeys’ weighing-in room, a bar and other facilities, such as storage space.

Further additions to Exeter racecourse occurred throughout the 20th century and by 2006, it boasted three stands: Brockman, Anstey and Haldon. Anne, Princess Royal, opened the newest of the three, the Haldon stand, in 2004. It houses premier ticket-holders.

Featuring an upstairs gallery with seating to watch the races, there’s a bar named after the race horse Best Mate and there’s also Desert Orchid Restaurant. Romany King bar is open to people who don’t have premier tickets. Prior to this, Lord Woodrow Wyatt had opened the Anstey stand in 1886.

Nothing can compare with the atmosphere and excitement of race day! As the first major race meeting of the New Year at Exeter, the January Jumps will be held on Sunday 20th January. The new mid-winter Sunday fixture invites racing fans to wrap up warmly and enjoy the racing action on Haldon Hill.

Race-goers who buy a premier ticket can enjoy the locally-sourced cuisine in the Best Mate bar. A free bus service is operating to and from the races at Exeter St David’s and Exeter Bus and Coach Station, so there’s no need to worry about driving. Under-18s are admitted to the event free of charge when entering with a full-paying adult.

Devon is home to a famous female jockey, Bryony Frost, who competed in her first Grand National in 2018 – almost 30 years after her father Jimmy won the National with Little Polveir in 1989. Bryony, 22, riding Milansbar, finished a respectable fifth in the race, which was won by Tiger Roll.

Back in 1989, Jimmy’s horse won on his fourth attempt at the gruelling course. With odds of 28/1, they won by seven lengths, making it a profitable day for some of the punters too! Bryony has ridden 45 winners already and says she’s happiest when she’s in the saddle competing in races.

Tickets for the January Jumps can be bought in advance. Alternatively, you can buy them on the day for all enclosures from a number of ticket-selling points at the course.

When you’re looking for professional SEO packages, don’t take a gamble! The Devon SEO Co’s products and services are always a safe bet!

Contact us to find out how our SEO expertise can boost your business’s chances of success.